The Boss - In Stock

His method of painting on both sides of the glass gives a result that visually excites its viewer.

Chris GK Hawkins was born and raised in Surrey where he stayed and attended the renowned Surry Institute of Art and Design for 5 years and then later attended the London Film Institute.

He is best known for painting contemporary portraits on glass in stunning monochromatic tones with highly colourful backgrounds, drawing from classic and modern influence.

From his first show in 2003 at Guildford House, Chris GK Hawkins has been receiving a great deal of attention for his work from traditional print press and online media. Chris, whose father is also an artist, began learning at a very young age and has since been inspired by Old Masters, such as Sorolla and Sargent along with inspiration from contemporary artists like Cy Twombly and Warhol, Chris restructures this classical artistic approach to art with abstraction and expressionism. 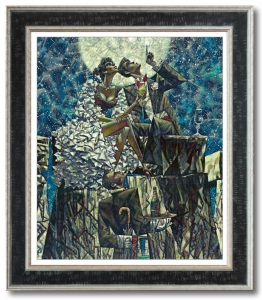