A new collection of anticipated works from

Poignant as always with Richard’s work, each piece tells a story with a hard hitting message. From original oil paintings, solid bronze sculptures to salvaged aviation parts. A definite date for your diary.

Richard Salter has served 21 years in the British Army and was medically discharged in 2017. He studied Fine Art with Buckinghamshire University and has painted throughout his military career pulling on the diverse array of Operational environments to influence his work which creates an emotional journey from the heart, being dubbed as “a poet in paint” by Art critic Daphne Todd OBE.

He has won a string of awards, his most recent being the prestigious National Army Museum Award. Richard feels very privileged to have his exhibitions written on by Royal Academicians and have his work in various collections which include Museums in London, York and Dorset.
You may have also seen him on screen where he competed with 6,500 other UK Artist’s for a top ten place on the BBC prime time show “The Big Painting Challenge 2015” where he went on to become a finalist and exhibited his work in Tate Britain, London. 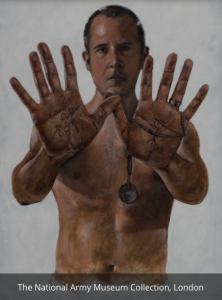 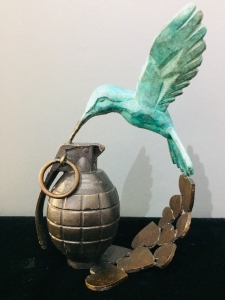